Lillies of the Valley 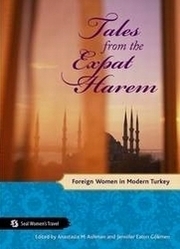 We headed back towards the Hollywood hills for an event on May 6th at the Tarzana home of Naime Berkoz, member of Turkish American Ladies’ League (TALL), whose board members organized this lovely Sunday brunch. Thank you to president Asuman Yılmaz, and board members present: Demetra George, Dilek Yücel (who is the mirror image of Jennifer’s mother in her thirties), Meral Haymes, and Ayşe Gören.

A crowd of 50 ladies and Demetra’s debonaire father enjoyed Naime’s stunning sylvan view of the valley from her veranda as well as the sumptuous buffet.

After selling out of TALL’s 50 copies and our 27 copies of the book (!!!) we enjoyed the warm temperature and sunshine as we spoke with an audience of Turkish ladies; American, Greek, Mexican, and German “gelins”; and adult children of Turkish and American parents.

Demetra (TALL founder and Grammy-nominated soprano) introduced our anthology as what she calls a “bathtub book”—so good, you want to relax in the tub with it! Wife of the Honorary Consul General for Northern Cyprus, Demetra bought 11 copies of the book for her husband’s diplomatic colleagues as well as all her friends.

Hafize Turgut of aLAturkaonline videoed the event and will follow with an interview later this month.

Audience members shared their own experiences, too, like Renate Günen, who describes her life as a young German bride in Istanbul in the 1960s. Leyla Cohen told us, “Having been born over 50 years ago to an American and one Turkish parent, it is good to hear of literature coming from [those who experience Turkish culture through foreign eyes].”

We were overwhelmed by the interest and enthusiasm of the members of this group and hope to meet them all again on our side of the ocean!

We wholeheartedly agree with comments by Network Security Consultant Tülin Mangir. She pointed out Turkey’s life-changing effect on famous Chez Panisse founder and food revolutionary Alice Waters, who, in Lonely Planet’s The Kindness of Strangers says, “The Turks were hospitable in a way that made the mythical come alive. It was as though we were living that beautiful story of Baucis and Philemon who took in Zeus and Hermes when they were visiting earth disguised as travelers. They gave us the very best of everything they had.”