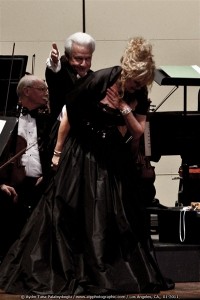 Beach Cities Symphony, under the direction of maestro Barry Brisk and accompanied by the powerful vocals of soprano Demetra George, gave an entertaining concert Friday night at the Marsee Auditorium on the El Camino College campus.

George, a former Miss Oklahoma, whose operatic voice could break glass, was the highlight of the evening.

Looking glamorous in a flowing salmon-colored chiffon gown, she attacked the lesser-known “Marietta’s Song” from Korngold’s 1920 opera “The Dead City” with great flair, her high notes sonorous and firm.

Donning a fanciful mask, she then segued into the role of the scheming Rosalinda in “Czardas: (Sounds from home)” from Strauss’ “Die Fledermaus.” It’s a demanding aria, and George’s voice at times sounded strident – especially in the middle register – but she built up nicely to the high D at the end of the piece. Few singers can hit this note.

For the second half of the program, George changed into a glittering black taffeta gown, first singing “Come scoglio” from Mozart’s “Cosi fan tutti.” Although she did not go for a dulcet sound, her voice seemed more mellow and smooth in Sieczynski’s only remaining well-known composition, “Vienna, City of My Dreams.”

And in “Meine Lippen (My Lips)” from Lehar’s 1934 operetta “Giuditta,” she also showed off her sense of humor and great acting skills. Unfortunately, the sound system at one point interfered with a series of “thunderclaps” but George soldiered on, creating a cute little interlude by making first violin Ron Shanon leave his violin on his seat to dance with her.

As an encore, George sang the beautiful “Vilja (The Magical Maiden)” from Lehar’s “The Merry Widow.”

To see and hear such a formidable artist for free at a local venue was most certainly a treat.

The spotlight was not on the orchestra this time, of course, and the “Die Fledermaus Overture,” a blend of familiar melodies from the operetta, started out a bit shaky, particularly in the violin section. But it’s a challenging piece, and audience members do well to remember that this is a true community orchestra – and a great one at that – which has provided free concerts for 61 years.

Schubert’s melancholy Symphony No. 8 in B minor (“Unfinished”), with its familiar dramatic outbursts, concluded the first half of the concert, and here the violins were unified. Especially noteworthy was the chattering strings against the plaintive oboe.

But Brisk, who in his youth lived and studied in Vienna for six years, made his orchestra really shine in the two closing numbers: Strauss’ lively “Chit Chat Polka” and the forever popular “On the Beautiful Blue Danube.”

Not to be outdone by the soloist, the orchestra also played an encore – Strauss’ festive “Radetzky March,” and the audience dutifully clapped and stomped their feet to the chorus as is traditional when the piece is played in Austria.

Beach Cities Symphony’s next concert is scheduled for March 25, at the same venue, featuring piano soloist Deborah Aitken and music by George Gershwin.